Archives of Family Medicine (AFM) was a publication of the American Medical Association (AMA). Since its inception in 1992, AFM was offered free of charge to family physicians, general practitioners, and primary care doctors of osteopathic medicine. AFM ceased publication in November 2000. The content of AFM remained accessible through AMA until January 2012.

This journal has now been triggered from the CLOCKSS Archive. In keeping with its unique mandate, CLOCKSS is proud to offer continuing and public access to all 9 volumes of AFM.

When the American Medical Association announced that it was discontinuing access, the CLOCKSS board determined that a trigger event had occurred and the 9 volumes of AFM were made public. 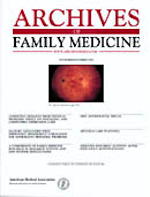 News In Your Inbox